Book Review: Someone You Love is Still Alive 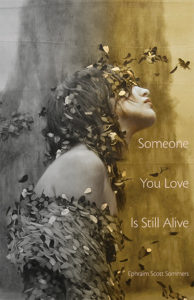 A geography of sex and violence permeates throughout Ephraim Sommers’s
Someone You Love is Still Alive. This energetic text presents readers with
contemporary insight into poetic archives that contort racial violence and love, shifting kisses amid murder reports that bend quietly under police badges. Sommers’s pragmatic aesthetic aligns with the vigor of Ai’s fairy-horror narratives in Dread and stands firmly with the dynasty-naming skills displayed in Harryette Mullen’s Sleeping with the Dictionary. Throughout 69 dynamic poems, his use of documentary and investigative poetics incorporates intimate scenarios that engage current topics ripped from contemporary news headlines. These compelling topics include marriage, gun violence, unrequited love, and substance abuse. The manuscript opens with a poem titled While America Mourns, I Write A Letter To My Sister, announcing a grim shooting in Newtown that relays an ensemble of recurring horrors accompanied by seductive scents. Sommers, in the midst of wrapping a difficult feeling around a sensitive familial vibe, notes:

I have heard the news of Newtown,

but, Sister, please excuse this carburetor

mouth on my lawnmower heart,

The texture of this poem represents an interrupted rhythm of hard and soft notes amid “fences” that “release perfume” and objects that “prick like lawnmowers.” The speaker tries to revert back to a kinder conversation that will embrace his sister, however, this whirlwind of death lifts him beyond understanding. Brace for clarity:

there was a shooting

in Aurora, there was a shooting

of another Syrian boy,

a shooting in Orlando, in Parkland,

Nature morphs into a creature of dejection. The aura of “roots” destroying driveways gives way to the destruction of bodies throughout the South in blood. Sommers offers an influential perspective on how to embark upon regional violence. His poetics surmised, seem to suggest the following cautionary tale: the same biased bullet fits all marginalized. This rubric of rage extends to Love Sonnet (Broken Into By America) In the First Year of Our Marriage. The shape of each stanza mirrors a  “staff,” offering a thread of musical insurrection. The death data of thousands of American groups intertwine with a wife and husband’s desire to design a dominant love. Fred Moten observes the following on the crossroads of sound and literature in his book titled In the Break: The Aesthetics of the Black Radical Tradition:

I want to think about the way that writing’s description

of sound (the literary representation of aurality) is also

The melody, streaming “out of this chorus,” wails warning readers of the cruel dichotomy of marriage between a “country & abused citizens” and two citizens whose love grows within the atmosphere of this same country. In the first two stanzas, policemen “kill” black Americans while a wife  “blows” invisible love notes and adorns “maroon” ribbons in her hair. Sommers states:

My wife blowing invisible love notes across her noodle soup. Dancing, my wife

in sunshine, in sandals, in cutoff shorts, in sunshades, in our living room. My wife.

This contrast zooms in on a duel/dual dance. The soundtrack: murderous “horns,” announcing a fatal performance of black bloody bodies “thrown” against the pavement by men in authoritative positions in juxtaposition to an affectionate couple whose strength rehearses gentle “jazz” with “blows” of sweet passion. Her “maroon” ribbon and flowing “brown” hair suggest an unending “beauty.”

This nontraditional couplet of violence and love finds its way to a third complicated combination: an alcohol and heroin addict. In The “Alcoholic” Sings To The “Heroin Addict” After A One-Night Stand: A B(ad)-Side From An Old Singles Album,” The “Alcoholic” sings to the “Heroin addict” through a collaboration of two lovers. One lover takes the lead and tries to find a way out of a struggle to get away from substance and social stigmas. Sommers explains:

This, our final morning. Samantha’s and mine, and still

she hasn’t said a word, and still this morning is a celebration,

when I am almost sober because Samantha is there,

The blues slips in and “stutters” alongside the lover’s doubts. He knows that in the midst of sobriety, he could “go back to this ending” to repeat yet another night of lustful sex and liquor. A hint of sympathy rears its head through refrains that gasp for the perfect image with “in the name of all the last compliments/ about our bodies we will never hear anyone say.” The lover “must” connect constantly with his alternate self to survive. This is how Sommers teaches us to love the verbal scars we often assign to ourselves. The war mirrors the relatives, friends, and lovers we battle daily. We must investigate our responses against their energy or absence to understand our next move.

Moten, Fred. In the Break: The Aesthetics of the Black Radical Tradition. University of Minnesota Press, 2003.