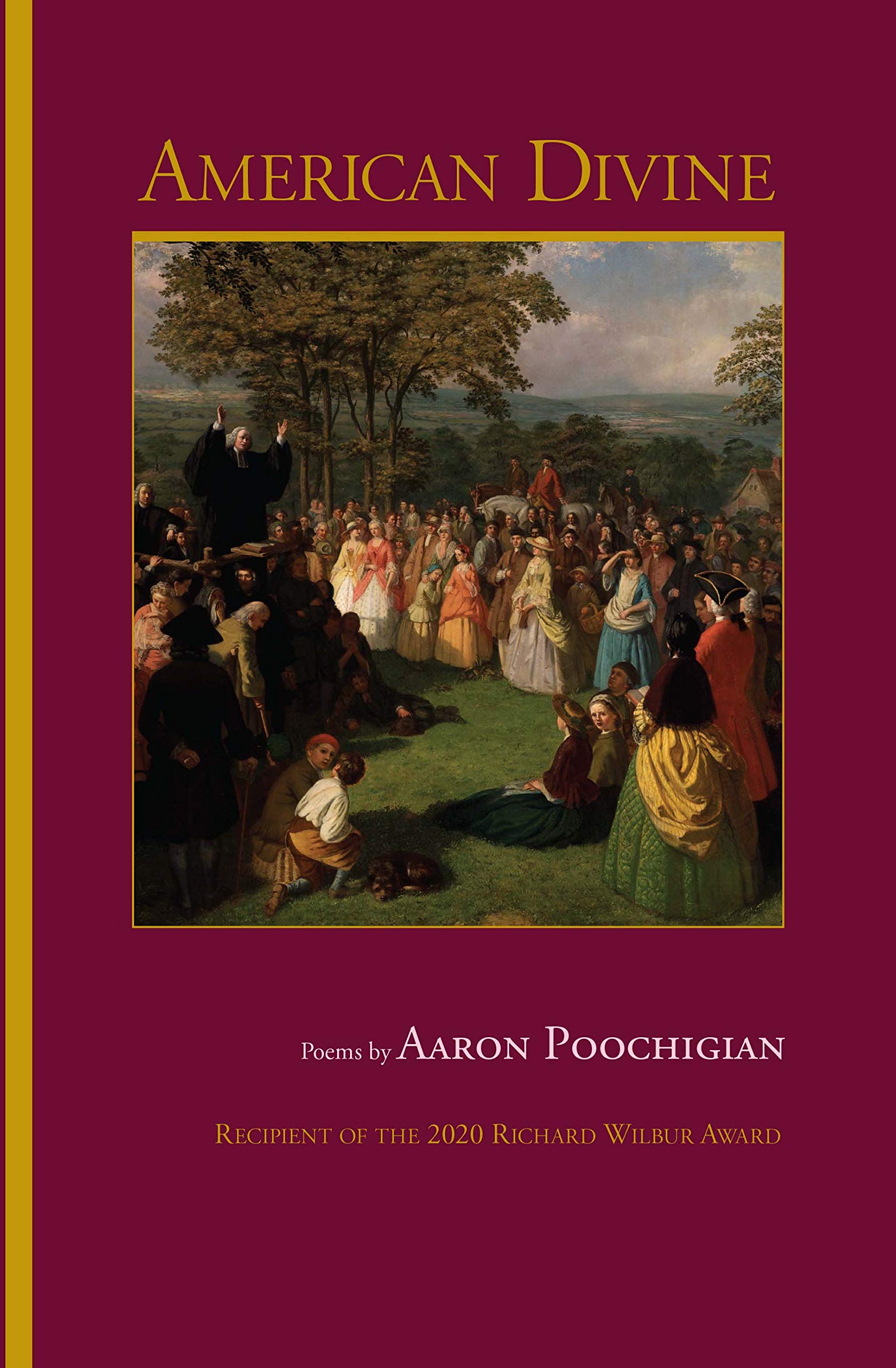 The title poem that opens Aaron Poochigian’s latest collection, American Divine, serves as the perfect epigraph for poems that act as rendezvous points for the mythic and the ordinary:

There is a heightened way of being here
in Union Square: as ice descends half-thawed
past whirling numbers on a glass façade,
so many coats attached to totes, briefcases,
blueprint tubes and roller bags are reaching
a stairwell to the subway. They don’t fear
the local Moses, Mort, who flails and paces
back and forth before the top step, preaching
to infidels about a Weather God:
“Azuzu whispers, and the world goes round!”

There is a heightened way of being in Poochigian’s poems, as well, whose ear for meter and rhyme enshrines his lines with a sense of import and magnitude. The musical and formal qualities pray us lean in closer and listen. As you can see (or hear!) from the above excerpt, rhyme is not limited to line endings. “Coats” clatters internally with “totes;” the ‘o’ in “forth” ricochets against the previous line’s “Mort.” Poochigian’s mastery of alliteration, consonance, and assonance reveals itself in sinuous lines, whose echoes of resonating sounds cascade down the page. The urge to listen harder, to pay closer attention is mimicked in Poochigian’s speakers, who find sacredness in unexpected places. In “American Divine,” a lit Manhattan Sephora sign enlightens and the Union Square subway bandshell becomes a shrine.

For those of you wary of formal elements in poetry, do not make the mistake of equaling structure with stiffness. Poochigian tempers high diction with low, solemnity with humor, and reverence with satire; he interrupts the meter with colloquialisms and invents his own rhyme schemes. In “The Ax,” the speaker addresses a former lover: “Where are you, babe, and what are you doing?” The poem encompasses such jocular lines as:

You, dear, you, for those seven weeks
after we met on forever.com
were my one and only snuggle cheeks,
my cinnamon bun, the absolute bomb

Even the structure of the book is playful. Divided into three sections, the first section—“The One True Religion”—contains a congregation of poems ironically populated with various gods from a glut of religious backgrounds: Ganesha, Artemis, Astarte, Eros, Osiris, and others. In “The Satanists,” teenagers concoct a mixture of commonplace, household fare and the bizarre in a devil-worshipping ritual: “We dug a hole / like a mixing bowl / and dumped in honey, / milk and wine — / then, for the money, / blood of swine.” In another tongue-in-cheek poem, “The Gospel of Prosperity,” Christian parishioners are advised to pay tithings to God in order to be blessed with material goods:

The man I met was smart enough to take
advice, and now, believers, he’s on fire —
buying up islands, serving on the board
of GE, all because he gave the Lord
a tenth of what he took in every week.
It’s no hard principle for folks to learn:
a person has to give so he can earn.”

As such, it is unclear what is more enticing: the promise of eternal life or shares in a Fortune 500 company. It must be noted that these poems never poke fun at belief itself, only at some dubious forms of demonstration of beliefs.

A personal favorite— “Arctolatry” (which Google tells me means “bear worship” or “faith of the bear”)—offers an iconic, if not nostalgic, depiction of a northwestern roadside diner: “A beehived female with insane eyeliner / has brought you meatloaf and a great big foaming / root beer float.” Many of these poems profess a sense of wonder without being overly idealistic. Poochigian’s speakers are seekers, searching for faith, Never-Never Land, and that which has disappeared or is in the act of disappearing. In “A Fool at Christmas,” an evergreen tree from the garden center acts as a “guard” of childhood awe in the face of the growing disappointment in holidays that comes with age. We will need to hold onto this sense of wonder and awe through the next two sections of the book: “The Uglies” and “The Living Will.”

Poochigian’s speakers seem to lose themselves in “The Uglies.” “Centralia, PA” features a lone spokesman—the last left in the dystopian ghost town of Centralia, which still burns to this day due to a coal mine fire in 1962—who asks us to call him “Gasp the Landlocked Trout.” The town has “lost its priest and postal code” and seems to be abandoned not only by its residents but by any form of god.

Elsewhere, it is not a matter of being lost, but that there is no longer any direction. A man, unable to sleep, paces city streets in “Insomniac:”

Where next? North, south, east, west? You lack direction.
Why this and not another intersection?
The sign says, Walk, but you’re way aimless, man.

This same sentiment is found in “Where the?” in which a speaker finds themselves disoriented in a trail-less forest: “This place feels lost, / like, if you had a compass, the needle / would just keep spinning round and round.”

America’s compass, too, appears broken. The poem, “MMXVII,” in the final section, “The Last Living Will” discusses the 2017 California wildfires and rising sea levels. The poem’s ecological focus seems to wonder what, if anything, will we leave for future generations.

“The Last Living Will” is the only section in which a title poem appears last, rather than first. Here, Poochigian names himself as the speaker (“I, Aaron Vaughn Poochigian…”), and is no longer lost, but “free to drift”:

I may be free to drift out of the bay.
Hereafter I shall whiff the fragrant coasts
of Araby, Dundeya and Cathay

and, further out, beyond the round world’s spalling
margin, hear Odysseus’ ghosts
squeaking like hinges, hear the Sirens calling.

It is this proclaimed control, as well the sharp constraint within each poem, that inspires belief in Poochigian’s at once measured and expansive voice. In a letter to Robert Lowell, Elizabeth Bishop wrote, “If after I read a poem the world looks like that poem for 24 hours or so I’m sure it’s a good one.”[1] After reading American Divine, you are sure to experience a heightened sense of awe in the quotidian, perhaps even spotting a neighborhood god or two while out on a walk.  Come get lost—or drift—in this latest book by Aaron Poochigian and let his music lead you through its dexterously crafted lines that sing you closer in.

Listen to excerpts of Poochigan’s book on Youtube here, and you can buy a copy of his book here.