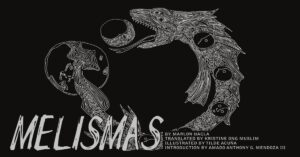 Early in Marlon Hacla’s second chapbook, Melismas, this reader gets the sense that Hacla must speak, though for him, the stakes seem to be much higher than they are for most, and, perhaps, more violent. But maybe that’s too strong a word. The poet speaks of arrival in an inhospitable place, a place that’s both familiar and foreboding:

After I was returned to the primeval nature
of the ordinary, I felt as if an eruption
of words went off in my chest. I suspected
movement of the divide that stifles the articulation
of whatever it is I let roll across my tongue,
that night has fastidiously gathered from nearby places

These lines point up the poet’s relationship to the ineffable, as they rehash the familiar act in poetry of directly addressing the inadequacy of language. Common as it may be, Hacla’s treatment of it (via his translator, Kristine Ong Muslim) paints a persona that is wholly uncommon. In the face of such difficulties, Hacla is at peace — this peace is one that allows Hacla to, in a sense, empty himself and allow the night (that is, the unknown) to “gather from nearby places,” and to integrate itself with him — in a phrase, this stanza is a killing of the poet’s ego. This killing is what makes Melismas so delightful — it allows each poem to live up to the book’s title.

It must be said that the poems here are plurivocal, and that plurivocality allows Hacla to move beyond voicing the singular concerns of a singular artist, and into a poetry that speaks on behalf of the many. Among the many things that Melismas is, it is a book with ethical persuasion in mind, though it’s never didactic — it instead uses the meaning and persuasion that inheres in emotion, and in the material of language. That said, these poems are not blind to the fact that expression rends reality. Hacla instead marks expression as a point of departure that creates other forms of experience of time and space. In this way, much of the book is marked by desire — the desire to create, via language, a field for shared experience, a field in which the many can achieve reconciliation.

Somewhat paradoxically, another striking feature of Melismas is Hacla’s voice, often verging on laconic (though this changes through the first third of the book, where things start to open up). This voice is at turns funny, disillusioned, as well as persevering. One of the book’s short, prosy poems is descriptive and reflective, and it also achieves a rare feat: imagination without falling into decadence. Hacla writes that

After I was returned to the primeval nature
of the ordinary, I felt as if an eruption
of words went off in my chest. I suspected
movement of the divide that stifles the articulation
of whatever it is I let roll across my tongue,
that night has fastidiously gathered from nearby places

For Hacla, then, the natural world is something to be dealt with. I mean to say that one’s relationship to and with the natural, unconscious world must be reckoned. The antagonist (the rain in this poem, reality in general) can never be ‘put down,’ as it were. That’s not even preferable. One must lament, like the widow, or speak, like the speaker of this poem — in either case, the best to be hoped for is, again, a kind of integration. Also, the bannatiran provides a model for mimesis: it is calm, its voice moving past “discoveries.” This is a fascinating stance for Hacla to adopt (he’s also a programmer). Perhaps in these poems lies a way to further reconcile disciplines, a way to meld the scientific insistence on certitude with the art’s comfort in ambiguity. For this reader, the poem also calls us to acknowledge that any means have unintended consequences, ones that reverberate past their intended ends. This, for Hacla, extends past poetry and into practices mechanistic, economic, and ecologically destructive.

Near the end of the book the poems are more pointed, and the style reaches its most forceful, as the poet writes that

Every Wednesday, we rehearse
speeches for the coming era of the
transcendent. No loneliness is meant to last
for anyone who tries dodge it. We are already considered the patron
saints
of those swallowed up by despair. Enemies might overpower
our imagination, and yet, we remain standing. We will sing
in one accord the groan of our suffering….

This stanza, as much as any other, is the essence of Melismas —a call for all to stand together, to sing or speak of one accord through affliction, and to rejoice in the hope that what is coming might, if we speak enough, be better.