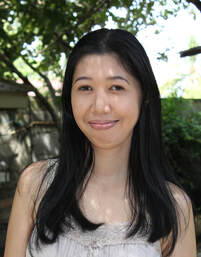 Kristine Ong Muslim has authored nine books including The Drone Outside, Grim Series, and Night Fish. Some of her work has been translated into other languages. She has translated Three Books, Walang Halong Biro, and others. Melismas by Marlon Hacla is an upcoming work that she has translated which has a book review coming out this month on the blog. Kristine agreed to answer a few questions about her translation work.

The story is found in her 2016 book Age of Blight. She explained its popularity, “‘Day of Builders’ is probably my most widely read story to date … It made numerous recommended reading listicles in magazines and was even used in an ethics course for engineering and computer science education.” Kristine explained that she has only been approached about translators and not vice versa. She stated, “In fact, I don’t think it was me they found, it was my stories.”

“Melismas” is not her first time translating someone else’s creative work. Her interest in translation work was that “literary translation helps [her] maintain a close relationship with the written word at all times.” She says that the intimate reading that comes with the job helps her stay engaged. It proves especially beneficial during times when blocked from finishing her manuscripts.

The process of translating involves multiple close readings of the material before starting any of the actual translation. “I start translating, paying attention to the social and political context surrounding the original text. And since Melismas is poetry,  I worked on it on a line-by-line basis where I remained attentive to the gasps, the outbursts, the mumblings, all the auditory tics of the source-language material,” is how she described her process.

“It is obsessive and painstaking work. Necessary too,” Kristine asserted.

Regarding Melismas, she stated that the most challenging part was that “Marlon Hacla uses archaic words, mostly Español-sounding terms, words that no one in contemporary Philippine uses.” She had to go to Hacla himself to clarify some of these terms.

She pointed out one time where she had the urge to ask if he had made up a word because she thought it would have been cool to do if he had, but she decided it was better not to follow-through on that urge.

Kristine avoids the dictionary while translating because she’d rather use context clues, and then revise later if there was a misunderstanding. “Translating poetry is not like translating a legal document or a technical manual where formal equivalence is required. [It] is to write a poem that approximates the source material … using the dictionary now and then to verify meanings while translating is not a good practice for me,” she explained.

Not using a dictionary benefits her by not enabling laziness. She said using the dictionary “prevents me from capturing organically what’s on the original-language poem into English.” The method does create moments where words or phrases that she is not familiar with that are placed close to each other which means she has little to no context clues to use.

For those looking to start working in the literary translation field, she advised “starting with  contemporary works by authors you are already reading and are speaking in the language of the immediate present.”

“Literary translation is participation in the global conversation, where you get to fraternize in a truly intrusive, truly enriching way with someone else’s mind, and your endgame is to pick through and interpret for another set of audience the contents of that beautiful mind,” she explained was one of the reasonings for doing translation work.

She clarified, “Sometimes, you get very little in return. You know, every time I glance at any bookshelf, I get all sorts of feelings. I see Dorothy Tse’s ‘Snow and Shadow,’ translated by Nicky Harman, and I feel a twinge of annoyance at its publisher for not putting Nicky Harman’s name on the cover. As a translator, be prepared for this eventuality of taking crap from publishers of your excellent work.”